Click on the images above and you'll
be shown interesting hints, tricks & infos.
Have fun reading! 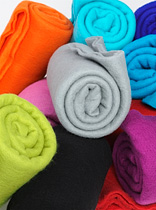 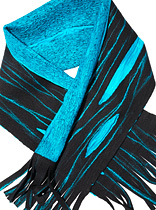 Despite all those modern felting resources, such as dryers, sanders and felt activators, many felters still prefer the quite meditative traditional felting method; felting with your own hands.

Only through that you can really feel the wool and are able to recognize how much it has compacted and connected with the silk. The most important traditional technique is the roll felting. Similar to felting in the dryer, the workpiece is sprinkled completely with soapy water and rolled up with a foil or net on top.

The difference is that with the rolling technique, the rolled up piece of felt gets rolled back and forth over and over again. While the dryer does all of that himself. When rolling with his hands, the felter has a way better control over the felting process itself and can intervene at any time if something moves out of place or can stop as soon as the desired density is reached.

Bamboo mats, bubble wrap, towels or similar objects are perfect devices as a basis or pad for rolling up the felt piece. They increase the frictional resistance and pressure.

If laying a needle felt yourself, using two or three layers FLYFEL®-tops, that have been layered crosswise, it will mostly shrink in the direction that it is felted or rolled. It is therefore recommended to unroll the felt piece, in order to check how much it has shrunk and possible turn about 90C° and roll the other way, so that it shrinks equally.
Industrially needled FLYFEL®-web on the other hand mostly shrinks crosswise due to its special structure. This should be considered when designing a pattern.

After wool and silk have connected well through rolling, you can continue felting and kneading with your hands without having to worry about something moving out of place. Finally the funnest part, throwing the felt piece on the wall or on a table. Because the longer the felting process takes, the stronger the connection between the fibers and the fabric and a higher pressure can and should be applied to create an inseparable connection.

If you want to, you can felt to a point where it is unrecognizable on which side the wool has initially been applied to. Through kneading and throwing, the wool becomes more and more dense, the silk is pushed together and curled. This effect is especially visual with pongé qualities and can be used as a design effect.

For the nuno felt scarf in the picture, a pongé 05 and FLYFEL®-web was used. On the inside you can see the typical crinkles of the felted on pongé silk.

Create Your Own TextileCosmos.com · IDEEN.com
Copyright © Schmidt & Bleicher GmbH & Co. KG Germany . All trademarks are the property of their respective owners. All rights reserved. Modifications and errors excepted.